Things you learn at ASDA

Labels: ASDA, life, pomgranate, till staff, time
So, we decided to shop at ASDA, for once. Maybe it was the promise of a lot of £1 deals for stuff we would have paid more for, at Tescos or Sainsbury's. Or maybe it was the thought of that excellent advert which still makes me laugh, I don't know.

Anyway, there we were, queuing up at one of the thousands of tills (ok, I'm exaggerating), together with what seemed to be 3/4 of the population of our town. It might have been cheap but we ended up buying a lot more than we had planned for. Oh well. I'll put it to good use.

The man serving at our till was an Indian looking man in his – I'm guessing – late 50s. He didn't say much, just smiled and started to scan our purchases, one after the other, in silence. We were busy packing away when he suddenly stopped and addressed me. 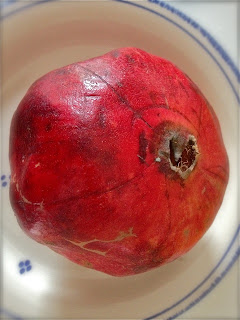 "Ah yes..." he said, lovingly."Pomegranate..." Holding up the sole pomegranate I had picked, to use for salads, he asked: "Have you ever opened up one of these?" I had to admit this was my first time. I was a pomegranate virgin.

He looked happy. He stopped everything and showed me, whilst pointing at the fruit with his ASDA pen, how to go about pomegranate cutting, as if it was an Art form. "You cut off this bit here and then... this bit." I thanked him and said something about it being similar to a mango.

By this time, my fellow ASDA customers had been waiting quite some time, in the queue behind me.
I began to feel uncomfortable. That's when he started THE RECIPE. 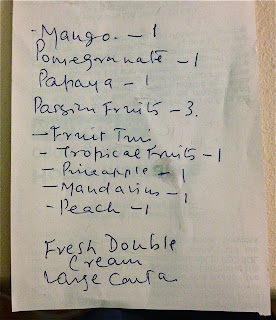 "Pomegranate is VERY good in fruit salads." he tells me. "I know", I said. He pulls out some spare till receipt roll paper and starts writing on it.
"Look", he goes – making sure I am giving him my full attention. "You take 1 x pomegranate, 1 x mango, 1 x papaya..." and on he went. "You can use tins, too. Like... peach... fruit cocktail...Add double cream and put in the freezer."
I thought to myself... this is going to take forever. In an attempt to round it all off, I added: "Yes, and some banana, yes – I know." 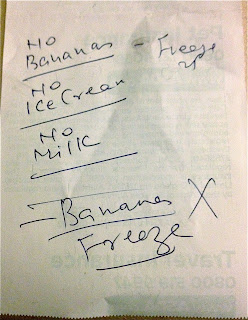 "No, no, no, noooo – NEVER banana." he said. And remember, if you use banana – NEVER put banana in the freezer. Promise me. NEVER." Upon which he pulled off ANOTHER bit of paper and wrote 'Bananas - freeze' with a big X next to it. I was beginning to love this man.

After what seemed like a lifetime, he finally went on scanning the rest of the items and I paid with my card. I thanked him very much for his advice and said I was looking forward to having a go at his recipe. As he started to take on the (poor) next customer, he smiled to me and said: "If you EVER need any advice on Indian cooking, my wife is in till number 15. Just ask her."

As much as I had felt embarrassed to take up so much time for other people in the queue, I still felt privileged to have met this man. It was like he made everything stop around us. Like in a time machine, he froze the current time and the ONLY thing that mattered... was what to do with that pomegranate.
All I could offer him was similar advice on Swedish cooking – if ever he needed it. That made him smile. And me, too.