Goodbye Jan – may you shine bright in the sky – forever.

I had sad news from Sweden today. Jan, 59 – a very good friend of mine, from as far back as I can remember – had been found dead in his flat. He had not got back to work after the Christmas and New Year holiday and his colleagues became worried. The police broke in and found him dead. He had been there for some time, not sure for how long, as I'm writing this.

Jan was a very special person. Without going into details, he had a tough childhood and the rest of his life was not that easy either. But in spite of the odds being against him in so many ways, he remained strong inside and kept on, as best as he could. He took a great interest in various things... Local, general and military History, Astronomy, WW1 and WW2, airplanes, ships, military battles, sci-fi, Tolkien, Robin Hood, fish, cowboys, indians, blues, rock, pop, archery, football (and with that I mean Spurs), food... I could go on. I will never forget the time I visited him and he opened the door dressed in a Sherwood green tunique, holding a bow and arrow in his hand, saying: "Fancy a cup of tea?"

Here is a photo of Jan when he congratulated my Mum on her 90th birthday, soon two years ago:

Jan was also an incredibly intelligent and learned man. He spent many years studying at University and read many – and I mean MANY – books. He took a particular liking to our own hometown of Arvika. He wrote books about Arvika, told previously untold stories about the people who once lived there, he did numerous historic walks around town with interested groups, pointing out buildings with a story to tell. In short, what Jan didn't know about our town's history was not worth knowing. In 2011, he was awarded a well deserved cultural price, 'Arvika's Profile 2011', at the town's 100 year Jubilee. I know this made Jan very, very proud.

He was an avid Spurs fan, member of the Swedish Spurs fan club and never missed a match. He even had a Spurs tattoo... COYS.

His knowledge about astronomy and literature kept him busy professionally, as he wrote book reviews for the local newspaper and organised star gazing evenings for school children – and adults, too.

Just before Christmas, he told me via Facebook that he had left a Christmas gift for me, at my brother's. I opened it on Christmas Eve – as is the custom in Sweden – and it was a lovely, wooden candle holder with a blue candle. A lovely present, made locally, by a mutual friend of ours. I never got to say thank you properly, which makes me sad. He never picked up the Christmas gift I had for him either, so that is still unopened.

Jan, you will be greatly missed. But I will think about you every time I light a candle in this, now very special, candle holder, for which I am truly grateful. I'd like to think you are now one of the shining stars in the sky yourself. 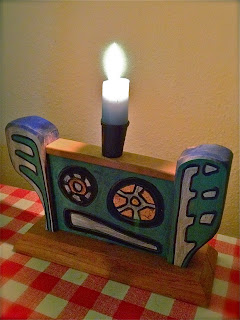