Labels: arson, crime, fire, history
After many years of living in their main house and pretty much ignoring the old, wooden house in the corner of their garden, my brother and family decided it was time to save a bit of Arvika history. So, they started a huge renovation project. Too many traditional wooden houses have been pulled down in our home town, in the mid west Sweden. Like many other towns, Arvika also went through a phase in the 70s, where wonderful wooden villas with elaborate, 'gingerbread work' verandas, were being sacrificed for modern concrete and glass structures. Luckily, we were many who protested against this madness and a voluntary group called "Save Your Town" managed to save quite a few. 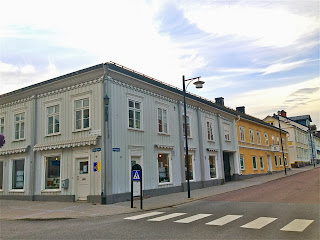 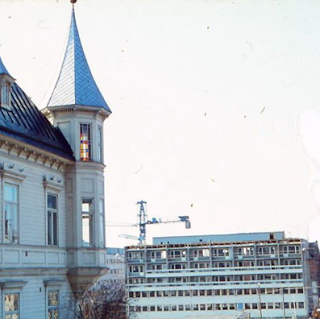 My brother's 2-storey corner house was one of these old houses. It had been used for storage of… well, stuff. For many years, even I had much of my Swedish life stored there, in boxes.

The whole family got involved, read up on the history of the house, looked at old photos to find out about its original paint, windows and so on. For about 2 years now, they have spent all their spare time working really, really hard on renovating this house. The aim was to rent it out to a family, once finished. 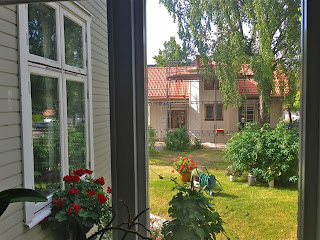 Friends came along and helped scraping off all the old paint. Another family member – a carpenter who specialises in renovating old houses – came along every day to make sure the work was done in a correct way. The whole house was basically gutted, the stone foundation corrected and pointed, new chimney, new roof, new... everything. The windows were specially made and painstakingly varnished, with linseed oil. That meant many, long winter evenings in the main house basement…
Their two sons also helped out as often as they could, after school and work. The youngest, who is studying to become a carpenter, has been doing his work experience in this house since October, he only had two weeks left. From initially having ensured a sound structure and exterior, the work had now moved inside. New floor logs were laid, and the next step was to deal with the interior. So much old history was found inside. A hidden safe, in which the first owner had left paperwork and newspapers which told a lot about the time that was. Gold dust for anyone interested in local history. 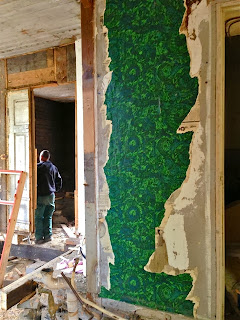 And so, at 4am last Saturday morning, the family were woken by the police, who had been patrolling in the area. They had just spotted the fire and the fire brigade were on their way. An arsonist had set fire to the whole building, starting with the door. The fire quickly spread upstairs. He or she managed 5 fires in 40 minutes in central Arvika: A skip, a door to an inhabited house, a small bin and the number plate (!) of a car.

Most of the house is now ruined and as I write, it is unclear if anything at all can be saved. I guess we just have to be glad nobody got hurt or died. Tools and materials can be replaced, people can not. 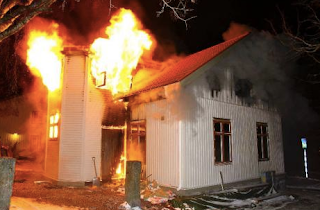 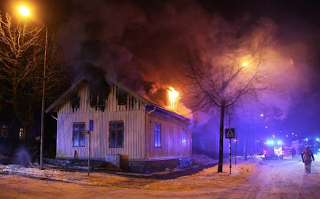 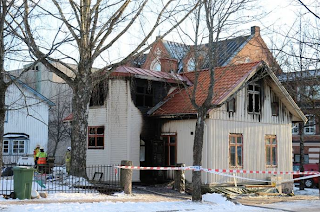 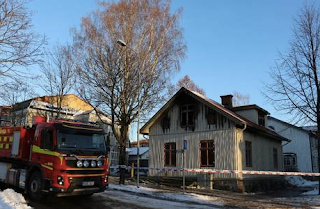 I just wonder what drives arsonists. Why? Is it the kick of blue lights and newspaper articles that does it for them? It's not the first time there have been fires along that street. When I stayed at my brother's place in September, someone had set fire to a plastic wheelie bin outside the very same house. 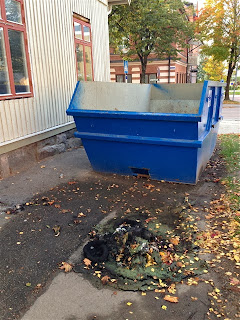 That time, we were woken at around 4am by the fire brigade, who were able to put the fire out quickly. Other bins, further up the street were also set alight that night. This had happened a few times, always around the same time, on a Friday or Saturday night.

Everyone praised my brother and family for their hard work in preserving this old house. Cheerful comments, grateful people walking past saying 'Well done' and 'Keep up the hard work'.

What a waste of time, energy and money.
Where will it happen next? This is what everyone now wonders, in my home town of Arvika.