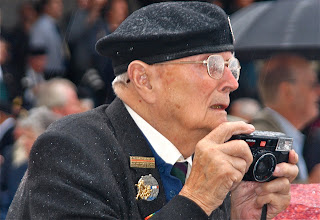 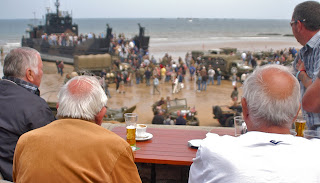 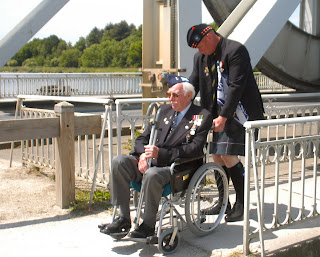 I recently got back from Normandy, where I was lucky enough to take part in the 65th Anniversary of the D-Day landings. I always enjoy being in France, but this was something different - and a very unique opportunity which I am grateful to have taken.
The whole event was like stepping back in time, back to the 40s. Everywhere you looked were vintage - mainly military - vehicles and people of all nationalities, dressed up as soldiers of every sort you can imagine. Willy jeeps and old ambulances, motorbikes and landing crafts.... you name it - they were there. Glenn Miller music was streaming out from cafes where both locals and visitors were enjoying drinks in the sunshine. This wartime atmosphere was not limited to the historic 'hotspots', but extended to the Routes Nationales, to petrol stations and little cafes everywhere alongside the landing beaches area. After a while, you were almost surprised to see a modern car and people clad in civvies.
At the same time, I felt there was something absurd over the whole thing. All this wartime memorabilia on display, the post cards, key rings, the special editions of the local papers, the busy restaurants and queues.... it felt a tad too 'touristy' for my liking. After all - the important thing here, was to honour the old men who were here when it actually happened.  It was all about keeping the memory alive - to hopefully make the younger generation aware of the stupidity and pointlessness of war.
I was with Ken - a Cornish medic, now 89. His landing craft hit a German mine as it approached the shoreline and he had to jump off and wade ashore - hurt before he even touched terra firma. It was stories like his that made it so fascinating to be part of this anniversary. When young soldiers - or wannabe soldiers - marched over the Pegasus' bridge playing the pipes - it suddenly dawned on you that the people who actually did it for real, were there - amongst you! In wheelchairs, with Zimmer frames, walking sticks... These silvery haired veterans, with medals on their chests were the ones who did it. Without them, our world might have looked a lot different now.
And yet, what made the strongest impact on me was the way in which these humble old men were so modest about the whole thing. They were around, they gladly told their stories if you asked them, in a very matter-of-factly manner, without added glamour. But I never saw or heard anyone go around boasting about it. They were moved, touched and had their eyes filled with tears at times - the harsh memories became too much, especially when thinking of those amongst their comrades who never made it.
I feel humble to have had the chance to meet and listen to some of these men.
Posted by Britt Warg at 21:09