The Story of a Stone

He meant the world to me. Maybe it was the lack of a father figure or maybe just because he was such a kind person, I don't know. It really doesn't matter. I just know I loved my grandfather Gunnar to bits during the first six years of my life.

In the small block of five flats where I grew up with him, my mum and my brother – he was the caretaker who... well, took care of things. That's what caretakers do. When the radiators didn't get warm, fuses blew, doors needed oiling, driveway needed gritting or wash basins needed unblocking – the tenants called for Gunnar. In Swedish, he was a "gårdskarl", which literally means "garden man".

Gunnar, my grandmother Signe (who died before I was born), my mum Karin, my uncle Erik and their 'foster brother' Sven were the first ones to live in this, then very modern three bedroom flat. This was in 1937, when the house was built. They were now going to enjoy the luxury of having a proper bathroom and all the other mod cons. Happy family. 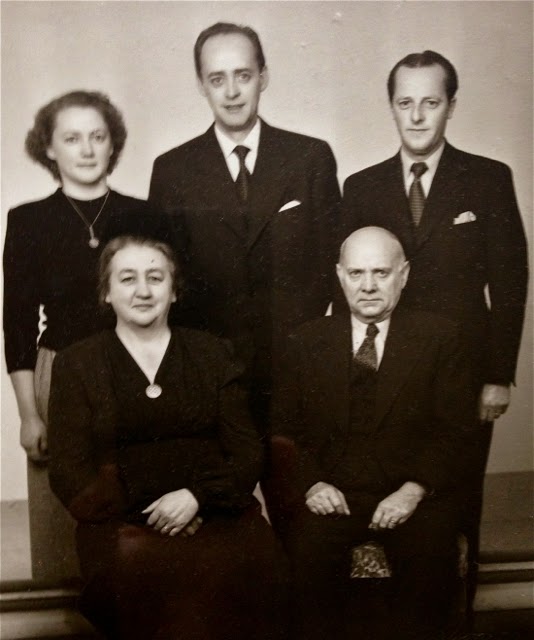 Later in life, when Erik had moved to America and Signe had died, my mum moved back in, now with my brother and myself. Bitter and devastated, she didn't know what else to do, having been left to bring up us children on her own after a painful divorce from my dad. Add the experience of her mum dying, as well. And soon thereafter, her foster brother Sven also died. I was only 3, my brother was 6. Mum shouldn't have worried. I didn't feel I needed a dad, as I couldn't remember what it was like to have one in the first place. Less arguing, if ever I need to ask for permission to do something, I remember thinking. Life was good. We did ok. I had mum, my brother – and my beloved grandfather.

I followed him everywhere. With hindsight, I realise he never got a moment to himself, poor him. He cut the grass, I helped raking it. He watered the plants, I did too – with my little watering can. Our neighbours smiled at the sight of Gunnar leisurely inspecting the garden with his hands behind his back, me in tow, with my hands behind my back. In the autumn, he collected leaves in a wooden wheelbarrow and let me sit on top of the piles of leaves on our way to the compost heap. Simple pleasures.

When he was tired, he would sit down to rest on a certain stone in the garden. I sat down, too. Back to back, we sat there. Our little quiet moment together. A time to breathe. 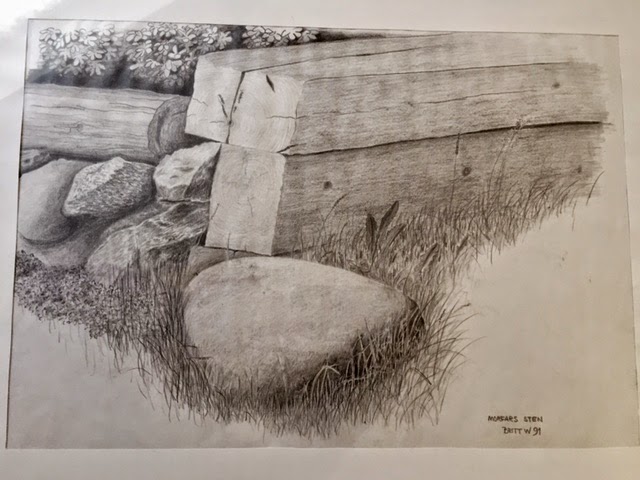 So, one dark December evening when I was 6, mum washed my long, blonde, wavy hair and ironed my Lucia dress and red ribbon, which she had hung up for it to be ready in the morning. In true Swedish tradition, I was going to be Lucia in the early hours of 13 December.  I was so excited, couldn't wait. Ok, I was only going next door, to the Svensson's, but still... my first time. Outside, large snow flakes started to gently fall to the ground, as I was getting ready for bed, still rehearsing the Lucia song. It was beginning to look a lot like Christmas.

"I'm just going to brush off that new snow before we go to bed", said my grandfather. And off he went, to clear the steps outside our front door. That was the last time we saw him alive. A few minutes later, Matti, the next door neighbour came rushing in, shouting to us that he found Gunnar lying outside, as if he had tried to make a snow angel in the new snow – broom still in his hand. He had died on his post. All hell broke loose, all the neighbours came in, mum was devastated, everyone tried to comfort her and I remember not understanding anything at all. I sat on one of the neighbour's lap, in another room, with the sliding doors almost closed. Through a gap I saw them carrying in my grandfather to lay him out on his bed. Nobody explained to me. "Don't worry. It'll be alright, Britt." I remember being confused.

Forward a couple of years, many grieving tears later – and you can see me in the garden, tending to my pretty flowers which I had carefully planted around that very stone where I used to sit and rest with my grandfather. It became 'my' stone. Every year, I planted new flowers next to it. I sat on it, jumped over it or ran around it. It was part of my childhood. A tribute to my grandfather.

One day, 20-years-and-a-life-in-Paris-and-in-Stockholm later, I move back in to the same block of flats, albeit the flat next to mum's. This time with my fiancee. Mum still lived in the old flat and my older brother had the flat above her, with his girlfriend. Back to the roots.
Then... as our first child came along, we found a nice nearby house of our own and moved out.

It was just one thing. The stone. Having 'reconnected' with it, I now felt very sad to leave it behind for a second time.

One evening, there was a knock on the front door of our new house. Outside is Tobba, a friend of ours – and also the man who took over our flat. He had heard the story about 'my stone' and thought he'd do something about it. "I dug up that old stone for you", he says. "It's outside, on my pickup. Do you want it? I know it meant a lot to you." Bless. That. Man.

And so it was that one day at work, I told this story to a teaching colleague, who is also a well known poet and writer. He was writing a book about – believe it or not – stones. And he became so fascinated by my story that he went home, sat down and wrote himself a poem which he included in his new book. Which was lovely. And as if that wasn't enough, he asked me to illustrate his book with my various drawings of stones! I had already made a drawing of my grandfather's stone so – that was a given. 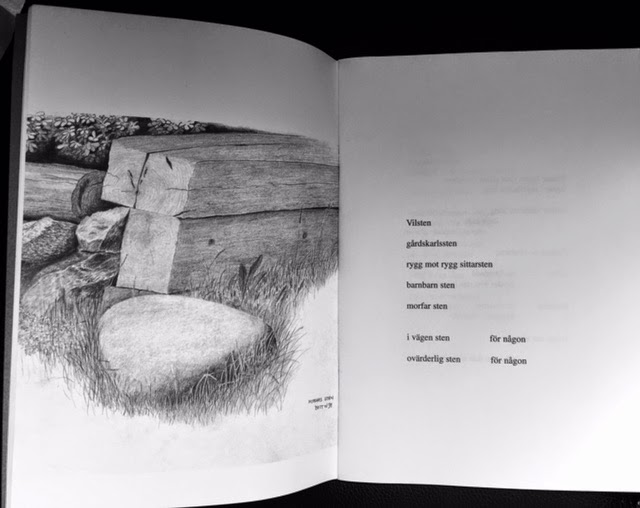 A few house moves followed, as it does in life – and here I am now, in England. And the stone? It's currently being kept in my brother's garden back in Sweden.

One day, it will become my headstone.