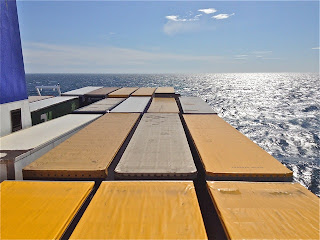 An Irishman with seven horses, a Yorkshireman with a radioactive cargo and a Swede with an English tractor. What could they possibly have in common?
Answer: They all boarded a ro-ro freight ferry from Immingham to Gothenburg last week – together with about seven other people. Oh, and me.

There are only 12 cabins of which just a few are single ones, so the chance of getting your own cabin on this type of ferry is pretty slim. In fact, you are not even sure to board the vessel until 24hrs or so before departure. Proper truckers outweigh common Volvo 'tourists'. It's Da (ro-ro) Law. 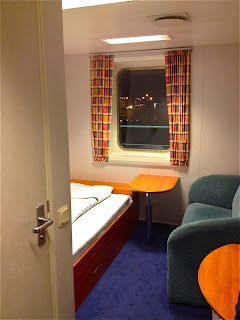 However, I was lucky. On a dark, rainy Tuesday night, I drove up to the dark Immingham docks... round about midnight – ready to board a few hours later. A polite, pony-tailed young man took my passport and showed me to my cabin. And it really was mine!
"Ah, you know, we try to accommodate lone women in single cabins whenever possible." he said.
The image of a beer bellied, net vest-clad lorry driver attempting to climb the bunk bed above me suddenly vanished from my retina.
I managed to get a few hours kip before breakfast, which was at 6.30 ship's (Scandinavian) time. 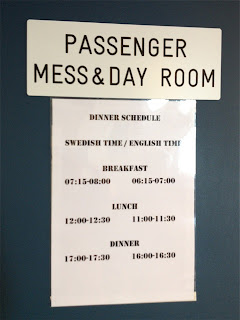 There were set times for meals (all included) which meant we all got to know each other quite well after a while. Our cabins were all in a corridor which lead to the intimate canteen with 4 small, round tables. Once the chef had placed the piping hot food on the cafeteria-like desk, he shouted: "Foooood's served!" The staff ate their dinner on the other side of the kitchen, in full view of us. A bit like "Upstairs, Downstairs" – or rather "Port and Starboard". 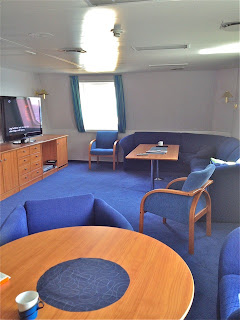 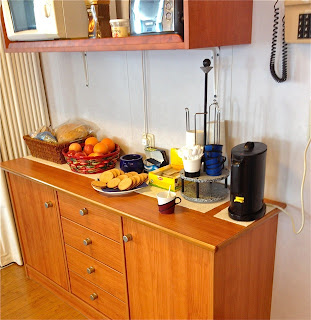 Next to the canteen was the 'TV-room', with a big corner sofa and some armchairs and tables. We were watching a mixture of English and Swedish telly, comparing languages and discussing programmes as we went along. It didn't take long before we felt like family.
Some had been doing this trip for years which helped us beginners to learn the ropes. A fifty-fifty mix of British and Swedish people. It's a wonderful – and unusual – feeling to be 'forced' to relax. I had brought a good book and my iphone was filled with podcasts to keep me going. When that got boring, I ventured out on deck and enjoyed the fresh Sea air and warm sun. Perfect. 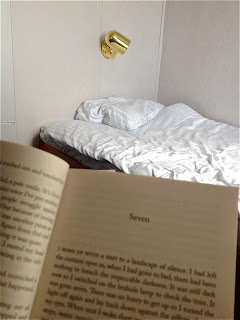 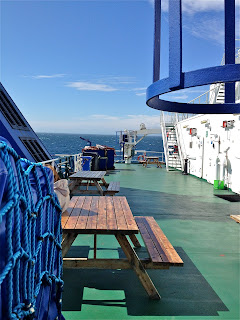 So what made this crossing so special? Well, part from being a direct and quick way to get to Sweden, it also meant meeting a bunch of very interesting people. There was a feeling of 'huis clos' about it all. There we were, confined to a limited space on board a container vessel for 26 hours. No internet, no mobiles, we were left to rest, read or actually socialise 'in real life'. One by one, I soon got to know my fellow shipmates. They had so many stories to tell, so many different reasons for being on this ferry. Like in an Agatha Christie murder mystery, each character became clearer as time went on. (Luckily, no murder was committed in the making of this journey.)

"Gothenburg – we have a problem." We hadn't been on board for more than a few hours when we were told about the faulty fuel pump. Oh yes. As this meant we were unable to make more than 10kn (12 mph or 20km/h), our 26 hour journey was now estimated to take 37 hours. 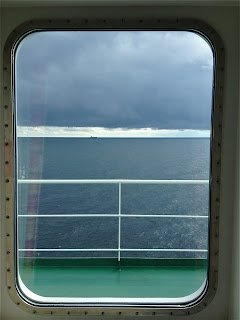 To cheer us up, the chef announced there would be fine dining tonight – beef fillet, no less. Oh and there was a possibility he could organise some red wine to go with it, should we want to buy some. After all, nobody was going to drive for quite some time yet, post fuel pump failure. We weren't too unhappy with the situation – we quite enjoyed each other's company. We were all shown how to use the satellite telephone upstairs, so we could inform our loved ones.

For the Irish horseman the prolonged journey meant a few more visits to lower deck. He had to look after his seven horses every four hours and each time, a member of staff accompanied him to the otherwise forbidden car deck. A strange coincidence was the fact that the horses were going to be transported to my own home town. All of a sudden, I found myself in a surreal discussion, with an Irishman, about which shortcut across our elk-ridden countryside to take. It wasn't his first time and I realised he knew his B-roads as well as I did. Small world.
A Swedish couple who had been criss-crossing England in their camper van told us how they had been chased by the Olympic torch. Wherever they went, the torch was there, too. And yet – they were unaware of its itinerary. 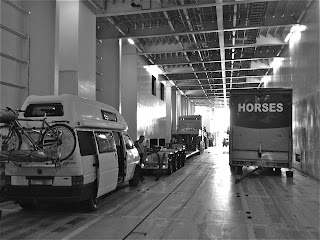 Even though we were pleased to finally see the rounded granite cliffs of the Swedish West Coast, I think I can speak for all of us when I say we felt slightly sad to have to say our goodbyes. I never learnt whether the Yorkshire man managed to transfer his radioactive cargo onto that ship, waiting in Gothenburg, ready to set off to India. How long were the queues behind the Swede and his extremely slow English tractor, on the small country roads? Did the elderly gentleman from Nottingham find his sailing gang and – did they like his Scottish whisky?

Come next week, there'll be another crossing, another bunch of people to explore. I can't wait.